Posted by Arja on October 3 in Nutrition

Trying to feed a child balanced meals and snacks all day is often easier said than done.  You’re exhausted, and it’s amazing just how much effort these little people can put into digging their heels in and saying no.  As exhausting as it is to continually try to come up with creative ways to feed kids, the health benefits are worth it.  Over the last decade we’ve seen a sharp rise in not only childhood obesity, but also in other health issues like asthma and ADD/ADHD, both of which can have symptoms that are tied up with nutritional deficiencies and excesses.  More and more children are eating nutritionally void meals and snacks, or worse, going hungry.  What we feed kids today definitely sets the stage for future eating habits, but is also critical to their growth, brain development, and a healthy immune system. 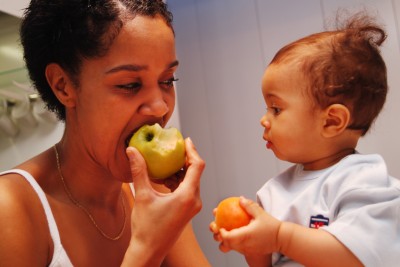 The main health issues facing our children are obesity, type II diabetes, asthma, and ADD/ADHD.  Childhood obesity, and a rise in cases of diabetes are the direct result of a high fat, high calorie diet that comes from our increased intake of fast foods, and use of packaged, convenience foods.  Children are also consuming far more fruit juice, pop, and other sugary drinks than ever before, which add calories, with very little nutritional value.  Families spend more time in their cars driving to and from the store and activities and less time walking.  Add to this a rise in television watching and video game playing and you have the perfect storm for health issues that come from a sedentary lifestyle.

The scary statistics are that nearly one third of Canadian children are overweight, and in the US, approximately 3 million children between the ages of 6-11 have high blood pressure.  In the last decade there has also been an alarming rise in the incidence of type II diabetes in children, which most will agree is a disease caused by lifestyle.  But even worse than the rise in childhood disease caused by overindulgence is the fact that, in Canada, childhood hunger has become such a huge issue that it’s considered a health crisis.

“Children who live in food-insecure households are more likely to have growth and developmental problems, be susceptible to illness and perform poorly in school, compared to children who are food-secure.” - Globe and Mail article Childhood Hunger is a Canadian Health Crisis

The use of food banks in the GTA has risen in recent years as families struggle to pay bills and still have money leftover to buy groceries.  It is often a choice between having a roof over their heads, and having food on the table.  There are school and community-based meal programs, food banks, and community gardens that all try to address the issue of food security and offer support, but it doesn’t seem to be enough.  This is a complicated issue that doesn’t have just one answer, but I believe it’s important to talk about it alongside anything to do with the importance of balanced childhood nutrition in order to increase awareness.  What can you do?  Donate quality food to the food banks (skip the boxed macaroni and cheese in favour of healthier non-perishables), and support community meal programs or any other group that is trying to feed kids.  A lot of people making a small contribution can equal a lot of support.

While many families are struggling to put food on the table, other families are struggling to feed their children good quality food.  Kids eat what they like, not necessarily what is good for them, so many families wage a daily battle to get a wide variety of nutrients into their little, growing bodies.  Common nutrient deficiencies in children include minerals like calcium, magnesium, zinc, iron, and chromium, as well as vitamins A, B6, B12, and C.  Feeding a picky eater can be an exhausting task.  After having yet another meal rejected the temptation to just have your kid exist on grilled cheese sandwiches becomes pretty attractive.  In the long run, the extra effort involved with coming up with creative ways to get your kids eating a more balanced diet is worth it.  It’s not just about childhood obesity.  Health issues like asthma result in an increased need for vitamin C, a diet higher in protein, more omega-3 fatty acids, and an avoidance of refined sugars.  There are many experts who believe that food allergies or intolerance can cause behavioral reactions linked to ADD/ADHD.  Foods like preservatives, sugar, artificial colours and flavours, and other food additives have also been implicated in ADD/ADHD symptoms and some parents have seen improvement from eliminating all refined and processed foods from their child’s diet.  Even chronic ear infections can stem from food allergy, and a deficiency in vitamins A & C, and zinc can result in a depressed immune system.

There are some great cookbooks out there devoted to recipes that creatively feed kids veggies (one of the most popular being Jessica Seinfeld’s), and you don’t need to drop an entire pay cheque at your local bookstore while you experiment – check some out from your library first!  If you’re the parent of a really picky eater and are worried that your child isn’t getting a wide enough array of vitamins, minerals, and other important nutrients, then it might be time to speak to your family doctor, or other healthcare professional about whether or not you should consider a supplement.