Posted by Arja on June 8 in Holistic Health

It’s easy to get stuck in a rut, sticking with what you know because it’s comfortable.  You have dreams and aspirations, but stick with the job you have because it’s safe, or you eat the same foods over and over again with little variation, because they’re familiar and you know how to cook them.  What if I told you that the only way that you’re really going to get the most out of your life is by stepping outside of your comfort zone once in awhile?  Shake things up a bit.  Get a little…  Uncomfortable.

It doesn’t mean that you have to give up everything that you love, or never eat or do things that soothe your soul again.  It does mean, however, that if you want to continue to grow, both personally and professionally, you’re going to have to harness the self-doubt and anxiety that’s holding you back and dive in.

Like everyone else on the planet, I get stuck in a rut.  Life gets busy, and before I know it, I find myself going through the motions of my daily life like I’m running on autopilot.  Despite the fact that I love cooking and trying new things, what comes out of my kitchen often gets affected by these uninspired periods!  There are a few things I’ve been wanting to attempt for a while – creating raw desserts, and making my own nut milks.  Neither of these things is revolutionary, and it’s probably surprising to people that I don’t already make my own nut milk!  But you know what?  Life gets busy, especially with a 3.5 year old running around, and it’s easy to just keep doing what you know because it keeps things simpler.

I don’t have a big sweet tooth, so finding substitutions for sweet things isn’t big for me.  Also, I’m more of a cook than a baker.  Raw desserts appeal to me because they’re usually made with a minimal number of whole food ingredients (nuts, dried or fresh fruits, coconut, and spices) and often only sweetened with things like dates, or small amounts of maple syrup or honey.  Well, a few weeks ago I went away on a girl’s weekend and because my friend was still following my cleanse diet, we were avoiding certain foods, which suited me just fine anyway.  I still wanted us to feel like we were having a fun, indulgent weekend because I believe that you can eat clean and still have a good time, so I made these Raspberry Bliss bars from the New Nostalgia website. 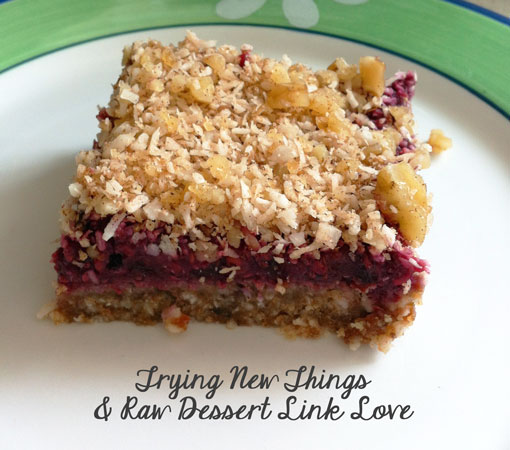 Well, not only were they ridiculously simple to make, they were soooo good.  Not, good in the “I’m feeling so deprived that I’d eat a cardboard box” sense, but good enough to take to your next potluck event and feed them to friends and strangers.  The bonus?  They contain four whole food ingredients plus a few spices,  and absolutely no refined sugar.  They’re so healthy I’d suggest that one bar could be a tasty, guilt-free afternoon snack.

I was feeling pretty torn about the fact that I was still buying almond milk for my family, especially since I make so many things myself.  I know that commercial almond milk often contains thickeners and emulsifiers like carrageenan, which can seriously irritate the intestinal tract.  So what was holding me back?  It’s certainly not time, because aside from the 6 hour soak that the almonds require (put them in to soak before you go to bed or first thing in the morning), the entire endeavor takes about 10 minutes.  But trying new things can be daunting, no matter how simple the task may seem.  So I finally dove in, have started making my own almond milk and can’t imagine myself turning back.  It tastes so fresh and amazing, but the best part is that I know exactly what goes in mine!

So, what’s holding you back from taking your next step?  Life is complicated, and that’s never going to change, but if you really desire change, then you need to stop doing the same thing over and over again and take the first step forward.  You don’t have to let this new thing stop you from doing the other things that you love, or need to do, but you do need to at least try doing it.  You can call them reasons, or you can call them excuses, but everyone has them, and they’re all valid to a certain degree.  It’s just at some point you have to find a way to creatively work around them in order to keep growing.

From here on in I vow to do 2 new things every month.  It can involve cooking, going somewhere new, wearing something I’d never imagine myself wearing, or doing something totally out of character for me.  That may not seem like a big deal to some of you, but two new things is about all I can handle right now.  You may do more, or you may do less, but the point is to do it.  Change is good!

I’d love to hear what new things you’re trying, so if you’ve connected with me on Twitter, or Facebook, please share!  Also, if you’re on Instagram, you can find me under the handle @balancebodysoul.  I’d love to see pictures of what you’re up to.