Have you ever made a soup with just water when the recipe called for stock (also called broth)?  It probably tasted kind of flat.  Vegetable, fish or meat-based stocks add depth of flavour to soups, stews, sauces, and even cooked grains.  But beyond just flavour, stocks, especially when homemade, add extra nutrition to what you’re cooking. 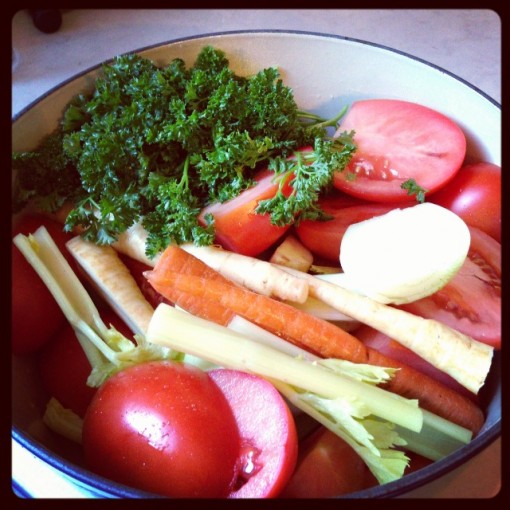 Store-bought stocks are certainly convenient, but they’re often quite high in sodium (even the low sodium varieties), and some even add things like sugar to them!

A vegetable stock is easy to make at home, and also happens to be a great way to clear out some extra vegetables that might be taking up space in your fridge!  All the nutrients from the vegetables end up in the liquid that you’ve cooked them in, and this nutrient-rich liquid then boosts flavour and nutrition in whatever you are cooking.

Meat or fish stocks have a different element of nutrition altogether.  You’ll get limited nutrients from the vegetables that you add to the bones that you’re cooking.  The real nutrition boost comes from the minerals that leech from the bones, cartilage, and marrow as electrolytes which are incredibly easy for the body to assimilate.  Cooking your stock with a small amount of vinegar helps to further draw the calcium, magnesium, and potassium out of the bones and into the broth.  Another important component of a good, homemade stock is the gelatin in the broth.  If you’ve ever made stock from bones at home, you may have noticed that after it is cooled in the fridge it has the consistency of loosely set Jello, or in some cases, an even firmer gelatin product.  Don’t be afraid!  This is good.  In fact, it’s very very good.

There’s a lot of information out there about the purported health benefits of gelatin, so if you’re interested in the deeper science a quick search of the internet should yield lots of info to sift through.  While I would caution you against using gelatin in supplemental form, a good quality homemade stock will contain it naturally.  Gelatin is said to be useful in healing from digestive tract disorders and can help the body more fully utilize the proteins being consumed at the same time as the stock due to its high content of arginine and glycine.

Have I sold you on the nutritional benefits of homemade stock yet?  Let’s get down to the business of how to make one!

-a large stock pot (5 quarts for  something like chicken stock, smaller for vegetable or fish stock) which can be easily purchased for a reasonable price from someplace like Ikea

Hit up your local butcher for good quality chicken parts.  It won’t cost you more than $1/lb.  Ingredients for making stock are pretty loose, but generally as follows:

Step 1 – Place whole chicken, or chicken parts into a large, stainless steel stock pot.  Add vinegar and water, adding more water if needed to cover chicken by 1”.  Bring to a boil and remove the scum that rises to the top with a slotted spoon.  Add bay leaves and all veggies, except parsley.

Step 2 - Reduce heat, cover and simmer for 4-6 hours (or more!).  The longer you cook your stock, the richer and more flavourful it will be.

Step 3 – 10 minutes or so before you are finished cooking your stock, add the parsley.  When stock is done, remove whole chicken or chicken pieces with a slotted spook or large wire strainer.  If you used a whole chicken, let it cool and then remove the meat from the carcass to be used later in soups, salads, sandwiches, or other dishes that called for shredded chicken.

Step 4 – Strain the smaller bones and cooked veggies in your large sieve into a large bowl and discard all the solids.  Reserve cooled liquid and cool in your fridge until the fat rises to the top and congeals.  Skim off the fat and store the stock in smaller containers (2-3 cups is best) in your freezer for use later.

*You can use a smaller pot for this – a large soup pot works well.

Step 1 – Put all chopped veg into soup pot and cover with water.  Bring to a boil, then reduce heat, cover and simmer for 3-4 hours.

Step 2 – Strain liquid stock from solids, let cool, and freeze in 2-3 cup portions for use in soups, sauces, or cooking grains.

There are no hard and fast rule to making homemade soup stock, so experiment!  The only thing I’d avoid for sure is the addition of salt.  Leave it out and then you can accurately season your final recipe to taste.

Once you start making your own soup stock you’ll never want to go buy it again!